The Tipsy Bull: Kolkata has a brand new Gastropub and MoneyFoodTravel was there to check it out! 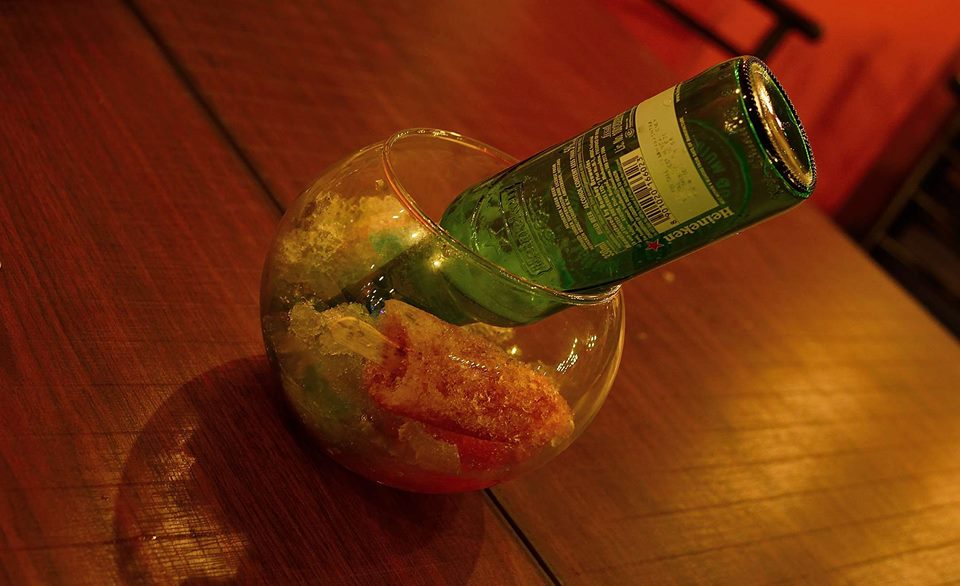 Tucked away in a quiet corner of a posh locality in Alipore, The Tipsy Bull (TTB) has a name that will intrigue you.

What’s in a name? A lot, if you come to think of it. As Nitish Saraf, the man behind the place says, ‘The concept behind the name is to make a mark on whoever hears it. The idea is that you charge in like a bull and leave tipsy, but not sloshed.’ So the place is meant for people, who after a hard day or week at work will come here to unwind over cocktails, hookah and a quick bite. And there’s good music too and a small dance floor thrown in for good measure.  At the entrance you are greeted with what you would best describe as a bull after a couple of drinks, one that has come over straight from work, complete with trousers, a white shirt and a tie. Yes, a selfie is a must with the ‘Tipsy Bull’ himself and you can sure expect a lot of pouts and tipsy poses. The wild-wild West: The place is meant for the young crowd and by young we mean people up to their 40s, and the decor and ambience speaks a language of its own.  It is inspired by the ‘carefreeness of 1930s Tex –Mex life’. So you find original wallpapers, high-top tables which are actually barrels, high –seating stools and gun light holders- a typical Texan bar setting. Witty quotes adorn the walls, waiters sport cowboy hats and there are posters of Modi and Trump and Sachin and Amitabh Bacchan on the walls, giving it a contemporary feel. To sum up, the decor and the feel, as it should be for such  a place, is casual – you will not find elaborate tables or white linen tablecloths, the place is not meant for those with a stiff upper lip but for those who like to chill and let their hair down.

The ‘Tipsy’ Turvy: This is the name with which the cocktail menu goes by. Here too, the names are sure to bring a naughty smile or a slight smirk – Road Romeo, Lick her Right, Cotton Candy Striptease and so on.  The cocktails, as mentioned before, are light, less on alcohol content and will at best leave you tipsy. The presentation is eye catching. Take for example the Goblet of Fire-Vodka Martini served over dry ice in a punch bowl for all that smoke and fizz. The Road Romeo, a version of a Shandy, beer served with ice lollies, a dash of lime and an empty inverted beer bottle, with its sweet and bitter taste, is just like the jolly and likeable guy who has nothing else to do in life but to flirt with girls. And then there was the classic whiskey marmalade, with real orange slices. There’s also a ‘Sober Soiree’ menu, with shakes and mocktails , so even if you are a teetotaller,  you can always have a drink in hand.

Tex-mex cuisine with a Desi twist: The grub, mostly finger food, is an interesting mix of American and Tex- Mex cuisine with a desi touch. A bit of digging up says that this cuisine originated hundreds of years ago when Spanish and Mexican recipes combined with the Anglo cuisine. The gourmet Tex-Mex fad picked up in the 1970s and the foods appealed to a younger crowd.  And here, we simply have to mention this pasta dish, Akhri Pasta, which is also the favourite of Priyanka M, the Masterchef India 2015 finalist and the lady behind the TTB menu. For those of us who feast on masala Bollywood movies, we don’t need to be told where this name comes from.  Coming to the dish, it is an Indianized version of Arrabiata, in makhni flavour, served in a covered bowl with a small cup of burnt charcoal to give it the smoky flavour and accompanied with naan. So here is a dish which weds the Italian with the narrow streets of Old Delhi and when it comes to the food, this is one dish that you would go all the way for. There are other usual suspects, the Teriyaki Tacos, the Boom Boom Chicken Lollies, the TTB Mezze Platter, the Bulls Eye Burritos and the classic Fish n Chips ( here name The Snob), all done well and the apt companion for drinks. The TTB is surely a place where you would like to hang out with friends or host a small bash. Remember it is not a place meant to spend a relaxed evening or to have a quiet dinner with your family.  Rather it is an exciting new addition to the list of gastropubs in the city that has the casual atmosphere of a pub but combines it with a gourmet experience that ranges from the predictable to the quirky.  With the temperatures dipping and the party season on in full swing, this is surely gonna be a hot destination for those young at heart!

2017 is here. If you haven’t planned your travel calendar yet, get these 4 Bs in place

Breakfast at MTR: 5 reasons why I absolutely loved this place on my…

C.R. Park: There is something fishy here!

Chopta Chandrashila trek: Christmas in the snows of Uattarakhand