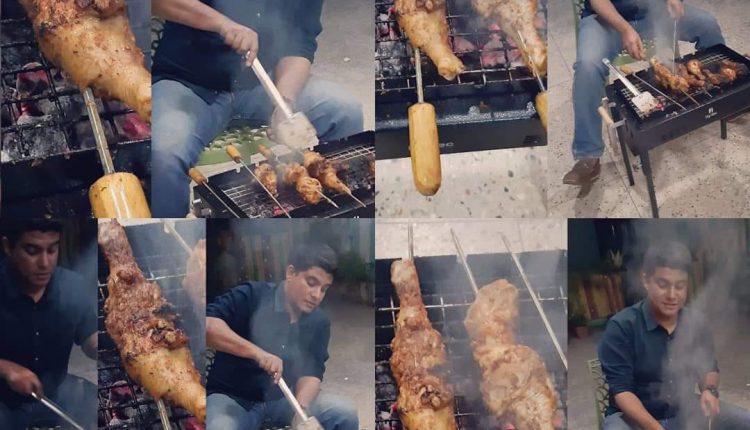 Back in 2004, there was a swine flu scare and chicken was selling at Rs 20 a kg, three friends decided that it was a good time to have a barbeque party on the terrace. Somehow we were sure that our chances of getting bird flu from eating chicken was too less to be worried about.

Barbeque ( also spells barbecue),refers to slowly cooking meat over charcoal or wood. Since it involves lighting a fire and smoke, it is mostly done outdoors.

It was my first experience of a barbeque party. One of my friends, Soumyasattwa Roy, with whom I decided to set up this blog years later, knew how to go about it. It is because of our love for food and travel and his love for cooking that we decided to start MoneyFoodTravel!

It was a chilly winter night in Kolkata and I remember the taste of the smoky tender chicken pieces melt in my mouth. The set-up was simple, bricks and charcoal and wood.

Over the years he has hosted many barbeque parties at different places. Every winter at least one barbeque party is a must for us. The Kolkata weather is just right for such parties. It is not too cold, but sitting by the fire under the sky at midnight with good food has a charm that nothing else can beat.

While chicken legs have always been a favourite, bhetki and pomfret fish and pork were also a part of the menu on different occasions. With it there was free flowing liqueur. I am a teetotaller, so I concentrated more on the food.

But my friend would improvise. I fondly remember the pieces of barbequed chicken in beer or wine sauce, the result -perfectly juicy chicken pieces coated in rich moist sauce.

We have been on a few trips together, where he has created an impromptu barbeques with mud and bricks.

When you look at barbeque, it surely has to be one of the oldest forms of cooking. This was soon after discovering fire when early humans discovered that meat cooked in fire was more tender, easier to eat and tasted better, perhaps about 1.8 million years ago. However, the modern barbeque originated somewhere- you guessed right, in the Caribbean. For Tiano, a Caribbean Indian tribe, barbacoa means grilling on a raised wooden grate. The word first appeared in the account of a Spanish explorer of the West Indies in 1526.

The winters will come and go but the Barbeque tradition will live on forever!

MoneyFoodTravel: It is all about exploring happiness!

Paella: A tale of two cities