Office conferences are mostly mundane but the one we had last February, was different.

The site was Pench National Park, Madhya Pradesh. Known for its Royal Bengal tigers (about 54 at the last count) and the setting for Rudyard Kipling’s most famous work, The Jungle Book, we were lucky. And I hoped that I would, for the first time in my life, get to spot a tiger in the wild.

We were putting up at Taj Baghvan which is located right at the edge of the forest next to a nullah ( dry riverbed) and a ten minute drive from the park’s entrance.  The resort has 12 stand alone suites with each suit having a machan (a covered jungle rooftop platform). The first couple of days were spent mostly in conferences. The campus is surrounded by wire meshes for keeping away wild animals. At night, a walk inside the campus, equipped with a torch gives you an eerie feeling as you strain your ears to listen to the various sounds of the jungle.

On the morning of Day 3, we set out on a jungle safari.   The gate opens at 7 am and 6 of us, equipped with blankets and hot water bags to beat the chill, set out to the forest in a jeep. It was still dark with another hour to go for light. We meandered a while through the buffer zone, the headlights of our jeep lighting the path in front of us. 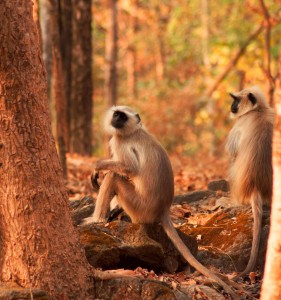 Slowly the sun was well over the horizon, lighting up the entire forest with a calm and soothing light.  And suddenly we heard it. Sambhars and langurs were giving out the warning call. A tiger was nearby. 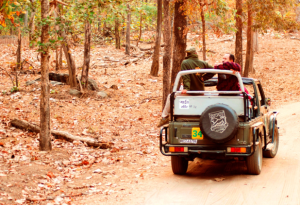 We followed the sound. The guide told us that tourists have spotted tigers and cubs recently. But it was all a matter of luck. Meanwhile, the sun was out and my heart was beating a lot faster than usual.

We turned a corner and saw her. She was right in the middle of the road and though all of were thrilled beyond words, she hardly acknowledged our presence. We followed the tiger for a while at a distance of 10-12 feet. And then it suddenly moved off the path and went into the jungle. This was the first time I had spotted the magnificent beast in the wild. And I had even managed to get quite a decent shot. I was lucky. We heard later that tourists in other jeeps had missed her altogether. 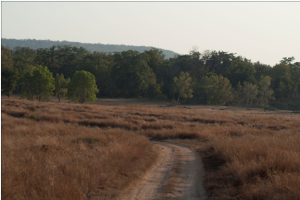 Deep inside the forest we had a breakfast of aloo parantha, sandwich and coffee on the car bonnet. Meanwhile, animals in the forest were also looking for food. On the way we spotted an eagle hunting for a snake. A wild cat was almost ready to pounce on a peacock but the sound of our jeep scared it away. And the best part, as were munching on our sandwiches we saw a jackal chasing a deer cub. They circled the area a couple of times and went inside the forest. We had no idea whether the cub lived or died.  The jungle had its own laws. We were mere spectators.

The good part about Pench is that it is more of grassland and less of trees. So the careful eye can see far away. Next day, after hearing a warning call and chasing the sound, we caught a glimpse of a leopard but it was too fast to be captured on camera. We spotted Nilgais, chitals and sambhars in large numers. The guide told us that Pench has the highest density of herbivores per square kilometer which is also the reason why it has large numbers of tigers and leopards.

While we were excited about the tiger, one could not miss the wide variety of birds in the forest. We spotted the Indian Roller, the Brahminy Kite and eagles. It was not that time of the year but we were lucky to spot a peacock spread its feathers in a courting ritual. 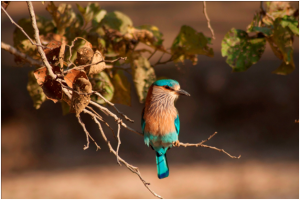 People bring back various things from a trip. For me, spotting the tiger meant that I was even more enchanted ( read Penchanted) by India’s national animal. It is our duty to preserve it for future generations. 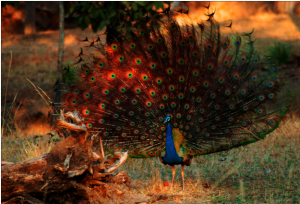 Eat wise, spend smart: How to create an eating out budget and stick to it

Know your coffee: All about cupping!