The Clive House: Traveling back to the early days of the British in India! 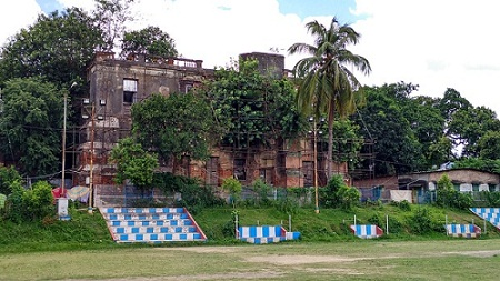 Probably one of the oldest existing buildings of Bengal, Clive House is steeped in history and mystery

Do you guys still remember Robert Clive? Yes, he is the man who defeated the Nawab of Bengal, Siraj ud-Daulah at the Battle of Plassey to conquer our country in 1757. We have read a lot about him during our history classes in school, but as time goes by, our priority shifts towards our professional goals rather than relating to the pages of history. Coincidentally, about a month ago, one of my colleagues told me that in Nagerbazar near Dum Dum, there is an old construction called ‘Clive House’ which was built by Robert Clive after his victory in the Battle of Plassey. I was quite excited to know about the place so close to us, but little known to anybody.

I was not a lover of history when I was in school, but started growing an interest after watching various documentaries shown on several TV channels on different historical facts. Curiosity pushed me to explore that age-old construction of more than two fifty years ago. I decided to reach that place with two of my colleagues on a Sunday morning, thinking not many people are going to be there to distract us.

On the very first view, we stood wondering whether it could be called a historical site or a haunted house, because the house seems to directly be from a horror film. It was built on a mound surrounded by large trees, a playground and a small temple behind it. From some sources I came across some interesting facts. Firstly, that the house and the mound existed before Clive, but no one was sure when or who had made them. After the battle of Plassey, Clive rebuilt the house, adding “a fine upper storey; the grounds were also laid out with great expense and taste”. No authentic account of the origin of this building can be found. The native tradition is that the mound on which it stands was thrown up by a spirit in a single night and to this day the house and the grounds have the reputation of being haunted. It is probably one of the oldest existing buildings of Bengal. In 2001, a shard of pottery taken from the mound attracted the attention of the chief of the Archaeological Survey. His trained eyes detected its immense age, and excavations began. The findings were all set to revolutionize the history of South Bengal. They revealed remnants of a civilization over 2,000 years old. History will have to be rewritten because nobody knew this area had a flourishing civilization so long back.

We talked to a few nearby residents, and they were really excited to tell their version. “The house used to attract many students and scholars of Indian History for their research works. The renovation work recently stopped due to some unknown reason. The internal portion of the house has also collapsed due to non-maintenance. It needs rapid attention, or else the piece of history will no more be able to stand on its feet”, said resident Ripu Bose.

In spite of our many requests, the authority didn’t allow us to go inside the premises, may be due to the fear of any accidental damage. A board is also displayed at the back of the house mentioning the prohibition of going inside the house. A camp office had been formed recently to look after the house. When returning, we saw some young boys were playing football on the ground in front of the house. We went there and talked to them. We were quite surprised to hear what they told us, their guardians do not allow them to go on that ‘House on the Hill’, because the ghost of Robert Clive will capture them, just like he did with the nawab of Bengal Siraj when he was just a boy!

Through this article we urge fellow Kolkatans and other history enthusiasts to visit this place if they really want to experience the memory of old British India, as it is gradually fading into oblivion. You can watch this video we made to know more about Clive House and its history:

myDaily Meal: A ready to drink shake that can replace your meal

Sherpafeet: How a techie turned entrepreneur is helping local guides…