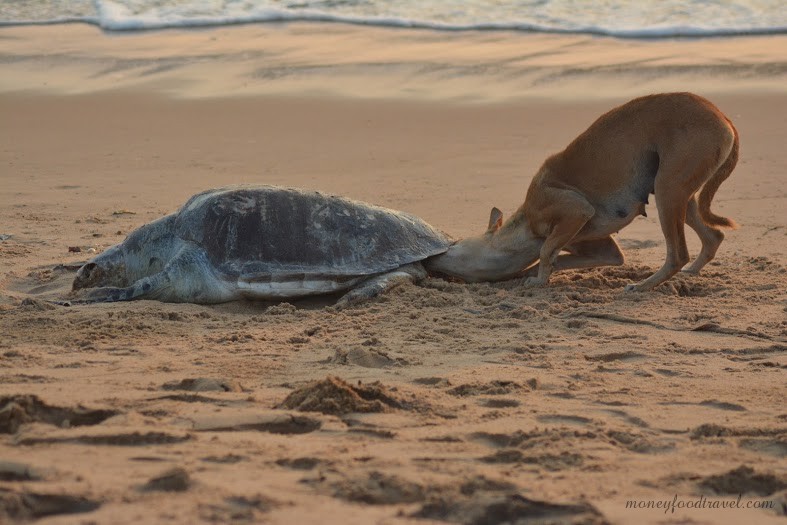 Travelling is happiness; it is about exploring, about knowledge, about an individual’s co-existence with the surrounding world, about nature, about society and of course taking responsibility to preserve nature so that the future generations can experience what we are gifted with. And furthermore it is about keeping the eco-system alive.
We travelled to Orissa to see the endangered Olive Ridley turtles. We travelled this time to feel happy to see them thriving and alive in spite of challenges created by humans. W had heard and read about the effort of plenty of groups working hard to conserve this endangered species. We wanted to create a story of survival and yes, there are survival stories, as we found out later.

But when we reached the beach the first thing we saw was a dead turtle lying just next to the waterline. The beautiful creature had been dead for a day or two, the eyes were hollow and crows and dogs were feasting on it. The unsuspecting turtle has been hit by a mechanised fishing trawler and died. For us, this was as depressing as darkness, we felt horrible from inside and felt ashamed to know that we, the human species, the most superior of all species are destroying the eco-system and other wildlife like tigers, elephants,‪ Olive Ridley Turtles‬ ‪and Black bucks‬. Worse is that we think that we can get away with this.
Conservation is happening, funds are coming, few good men are working towards the goal, but a lot more needs to be done.

The Olive Ridley sea turtle nests at several sites in the western Indian Ocean, Indian subcontinent and Southeast Asia. The single most important breeding area for them in the Indian Ocean along the Bay of Bengal is Orissa. In 1993, biologists from the Orissa Forest Department and the Wildlife Institute of India learned that large scale nesting of Olive Ridley turtles was taking place near the mouth of the Rushikulya river. This area is the location of one of the largest mass nesting (arribada) sites of Olive Ridley sea turtles in India. The turtles mate in January and February, the females come to the beach for nesting around the middle of March, then the new ones are born and the babies slowly make their way towards the vast ocean. A unique and beautiful phenomenon of nature. This is the time the whole team of conservationists, tourists, travellers and all who are directly or indirectly involved, flocks toward the beaches.
We went to the tent of forest dept but no one was there. We came across one NGO representative whose duty is count dead turtles. He said that three more turtles had died in a span of 3 kms on the beach. Add the one on the Bakkhali beach in West Bengal on the same day and that makes it four that we know of. The sad bit, turtles dying when they are in the process of creating new lives.
News of dead Olive Ridley turtles washing up on the shore in large numbers is nothing new. Over 150 dead turtles washed up at the Puri shore around January 20th. On January 20, 45 whales died after being stranded on a shore in Tamil Nadu. A different species. But the same story.
The locals were aware of the dead turtle since the previous day, but then a dead turtle is not a dead tiger or an elephant or even a Black Buck, just a dead turtle lying grotesquely on the beach. 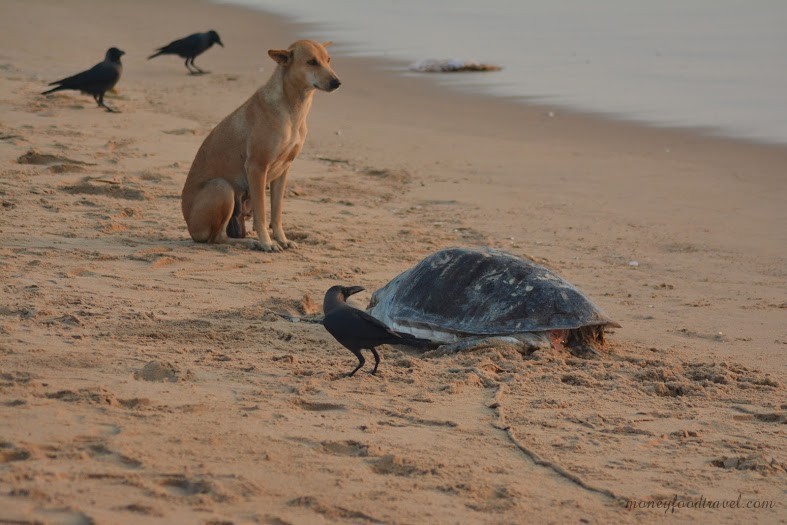 What can be done to stop such deaths? Why can’t we stop mechanised trawlers for few days and encourage fishermen to use rowing boats? Why can’t fishermen be compensated during this period? And why can’t we dispose off a dead animal properly and not leave it to the scavengers?  And give these beautiful animals some space?
We should encourage tourism and it is no harm if funds generated in tourism activities are further used to boost conservation activities. But are we doing enough? We leave you with these pictures to decide. Please share your comments and spread the word around. These animals need our help.

What it costs: A road trip to wild Orissa

Uttoray: This little village in West Sikkim is a must visit for its…

When in the wild, you are on your own! 15 important lessons…