Monsoons mean a lot of things to a lot of people. For most of us living in Kolkata, it means a respite from the oppressive heat and also being stuck in the traffic jams after heavy rains on the way home from work. One enjoys the rain most when one is not having to go out to brave the showers or the puddles and the potholes.

While as a kid rains meant paper boats and stepping on puddles on the way back from school, now, that we are all grown up and busy, it evokes images of adda with friends.

And for the romantic at heart, the setting is equally important. Ideally, you should be sitting somewhere cosy, as the raindrops pitter-patter on the glass. Raindrops on the glass create magic and how! Observing the trajectory of raindrops as they fall on a glass surface is a fascinating experience which physics will explain it in terms of cohesion, surface tension, gravity and a whole lot of other factors. Or one may look at the world outside through the glass and when it rains and when the misty, fogged-up vision gives the surroundings a far-away , ethereal feel.

As the weathermen predicts more rain, and we spend a lot of time outside Pujo shopping, here is a lowdown on what would be two of the best destinations in Kolkata to hang out in this month, depending on whether you are in the mood for tea or beer.

What: Curated selection of teas with assorted tid-bits

For the quintessential Kolkatan , monsoon evenings mean endless cups of ‘cha’ with some finger food to go with it. So you think of hot milk tea in a khullar, by a roadside stall, even as you bite into samosas straight out of the frying pan. Chef Alok Anand gives wings to his creativity and recreates this magic, albeit in a 5-star setting of the JW Marriot Kolkata.  Which is kind of cool, as you do not associate such experiences with luxury hotels. And that is precisely why the experience, though on familiar lines, is unique and something you would cherish.

On offer are four varieties of tea- ginger, cardamom, cinnamon or bishop’s weed with a set menu of assorted tidbits to accompany it.   It is appropriately served in earthen cups and what you have are spicy and flavourful teas which also comes with a load of health benefits. 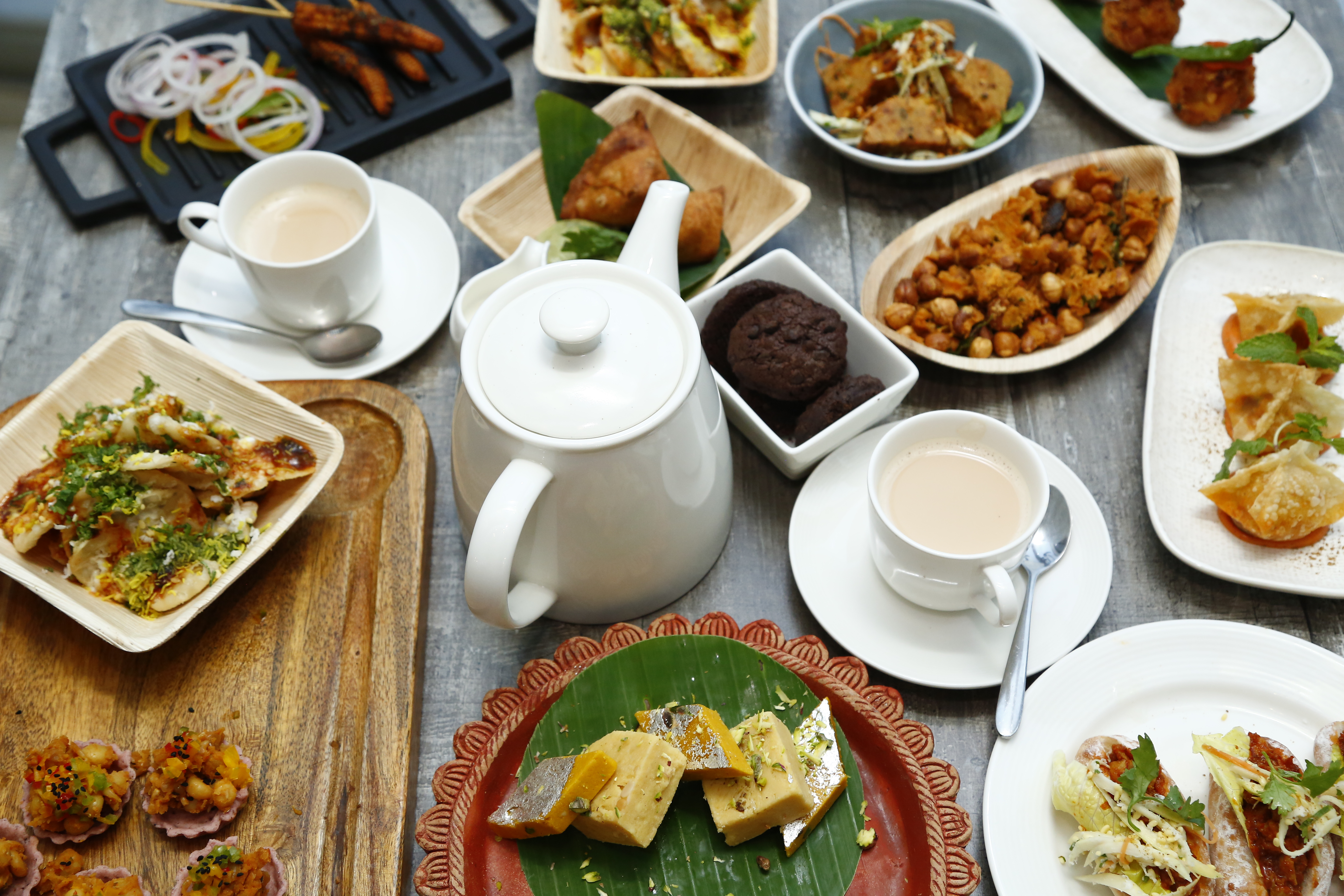 The chef has carefully taken inspiration from popular snacks eaten all across the country and given them a touch of his imagination, which is quite a thing, as some of the things you will taste here you would not have tasted before or even if you have, it would bring back a whole range of memories from your past and make you feel that tinge of nostalgia that would pull at both your heart strings and taste buds. 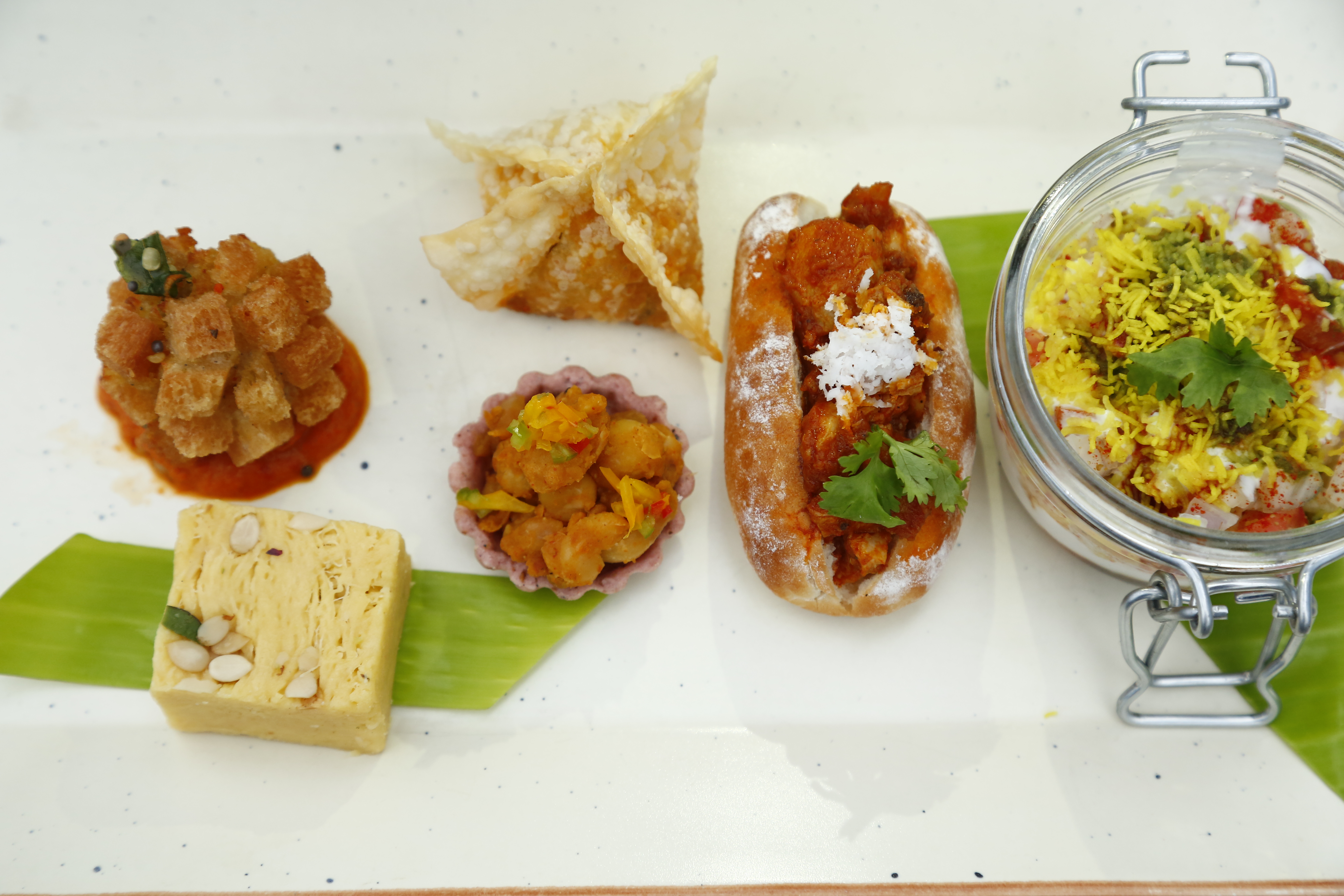 So the Baked Masala Crisps with Tomato Relish is actually baked nimki with the tangy tomato chutney with panchphoron that all of us have grown up on, the White Pea Stew, Spiced Beetroot Tart is our favourite ghugni on a beetroot masala tart and The Crisp Lentil Cakes, Tempered Carrots and Green Mango Salad is daaler vada served with koshambari salad. Of course there are chicken or vegetable samosas and favourite papri chat served beautifully in a jar. There are two set menus that will be served on alternate weeks so that there is something new on offer if you drop in on another week.

While we have discussed the tea in an earthen cup and the selection of assorted snacks, we have to mention the setting- the high-roofed all glass facade of the hotel lobby which creates the ideal ambience for tea and conversations. So all through this month, if you are catching up with your friends, taking your loved one of a chai date or even taking your parents out for tea, you know where to head to.

What: Signature beer cocktails and a menu of fries and wings

How long: Till September 29

A pun on a term we associate with a gloom in the markets takes on entirely new meaning here. Beer Mrkt is the ultimate beer festival that serves up seven signature beer cocktails and snacks to go with it. Beer may be one of the oldest drinks on earth, but it has never been a bartender’s favourite because it is something that tastes best by itself. Beer and liquor do not go together or that is what we have been told. While beer has been combined with other stuff ( think Shandy where beer is mixed with a carbonated drink like lemonade, ginger ale , soda or juice) it is only recently that mixologists have opened up to the idea of mixing beer with other liquor and creating cocktails.  And that is what makes the beer festival at Monkey Bar a novelty.

So you have the The Peach Trip, a concoction brewed with beer, Jim Beam, peach syrup and Angostura bitters, the Monkey Mule , a brew made of beer, vodka, house made ginger cordial, lime and mint, the Bloody Roman which is beer, tomato juice, tabasco, Worcestershire sauce, lime juice, black pepper and salt, the Beer Bong, a heady combination of beer and dark rum and the Beergarita with Beer, Tequila and lime juice.

At MFT we think that cocktails can be very refreshing and is good for light drinking at gastropubs and lounges while hard drinks are good when you are at home.

French fries go best with beer as they are light in flavour and a beer helps you cleanse your palate without interfering with the salty taste of the fries while the crispness cuts through and brings out the taste.  At Beer Mkt, you are spoilt for choice with Mexican Chili Cheese Fries topped with baked beans, melted cheddar cheese and pico de gallo,  the Ham & Cheese Fries oozing with cheese sauce and a generous helping of grilled ham, Pizza Fries baked with delicious tomato sauce, fresh mozzarella and a sprinkle of oregano & basil and the  Poutine which is French fries topped with cheese sauce, mushroom gravy, bell peppers and caramelized onions with an additional helping of chicken, if you fancy. 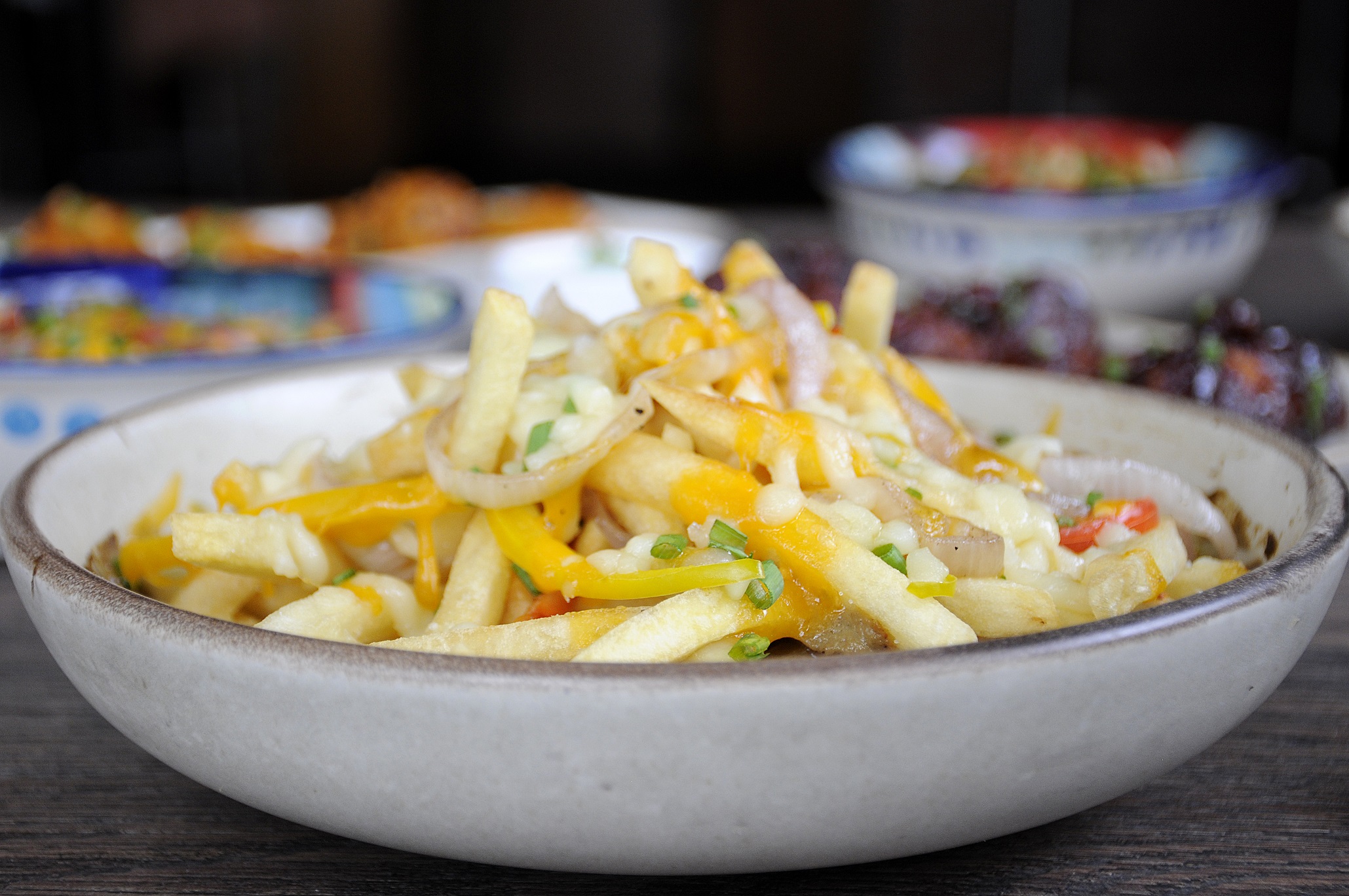 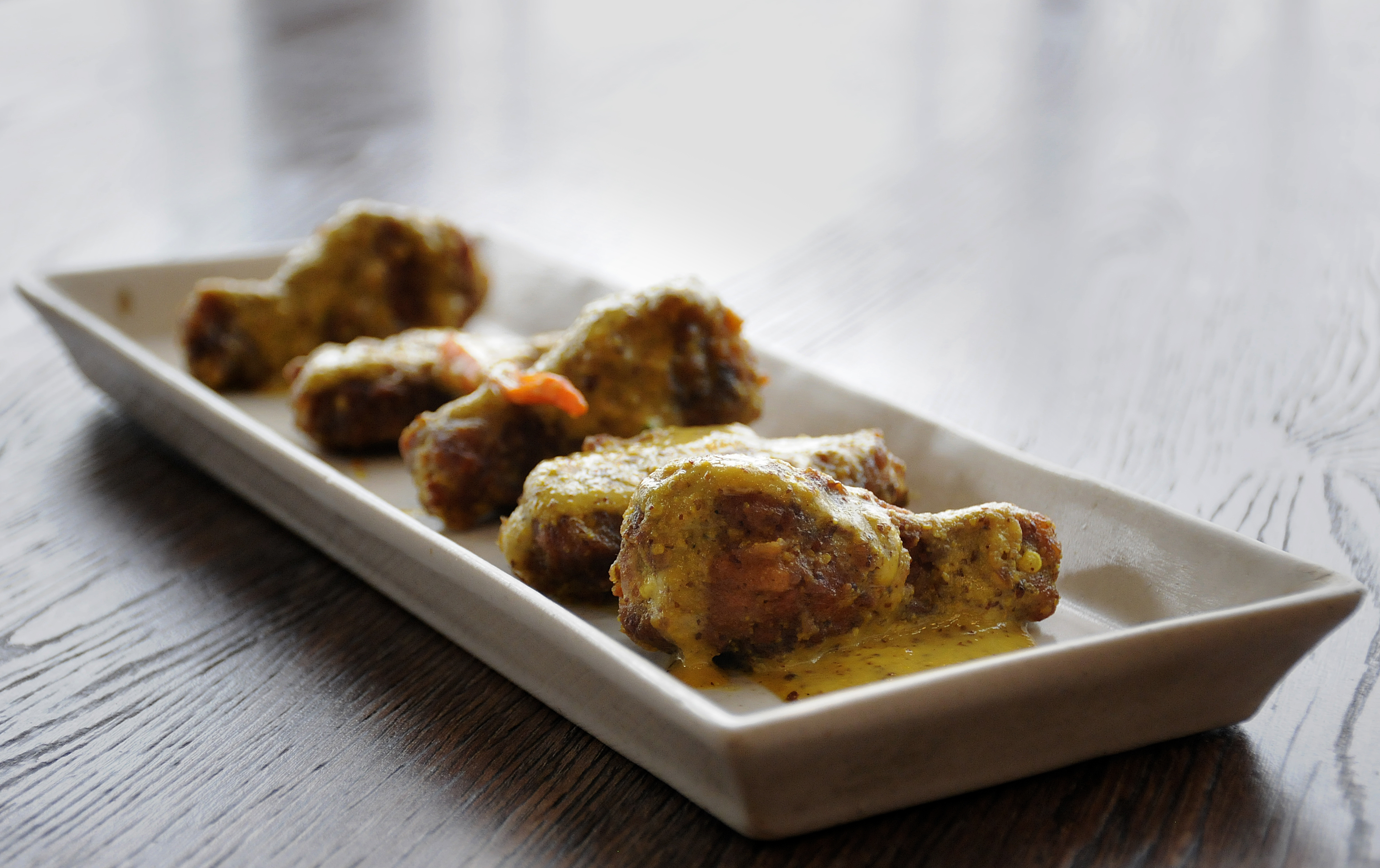 And you know what is the best part? If you can get a table at the far end which offers you views of the city with the Victoria Memorial, St. Paul’s Cathedral, the second Hoogly Bridge and the more recent icon, the skyscraper THE 42, in a distance, you are privy to one of the best views in town. And in the late afternoon, when the sun is going down and the lamps over the table are turned on and subsequently dimmed, the entire place acquires a surreal feel and with the drinks and the bites, you feel that you have been transformed to someplace magical and you know what the bard meant when he said, ‘For a quart of Ale is a dish for a king.’!

My first trek to Uttarakhand: A tale of rolling meadows and misty mountains

Have you gone paragliding? This girl’s experience will make you want to do so

Love to travel? Here are 3 ways to have a vacation budget in place

Know your coffee: All about cupping!