Deoghar: The abode of Gods and Goddesses Arghya Das writes about a trip to Deoghar, in Jharkhand, a very popular pilgrimage and health retreat, which has recently fallen off the popular tourist circuit. In doing so, he delves into the mythology and history surrounding the place and tickles our tastes buds too!

Traveling is a passion one should possess to know the unknown. Human beings have distinguished preferences for this, as some love to explore the mountains, some the seaside or some the countryside. I am also not an exception. Luckily, my wife put the topic of visiting Deoghar to me months back, as she heard a lot about the town from her friends. I also got to know about it from various travel journals describing it as a centre for pure refreshment outside the busy city life.

We managed to convince some senior family members including my mother for the trip. They got convinced due to the sacred values of the city. We booked two couple rooms and one dormitory in advance within the premises of Ramakrishna Mission Vidyapith. We took the Kumbha Express from Howrah station to reach Jasidih, which is well connected with Deoghar. It took around 5 hrs to reach our destination.

The ashram has their in-house breakfast, meal, tiffin and dinner timings for their guests. As the tiffin-time (which is sharp at 4 pm) was over by then, we walked out of the guest-house to have some local delicacies. We started with the pedas which is quite renowned for its taste worldwide. There are hundreds of shops selling varieties of pedas derived from pure cow-milk. Then we had some kachauri with cholar dal from a very old sweet-shop near Tower Chowk area accompanied by hot gulabjamuns. The dinner at the guest-house was quite simple, comprising of rice, dal, vegetables and fish curry with one full glass of cow-milk at the end. 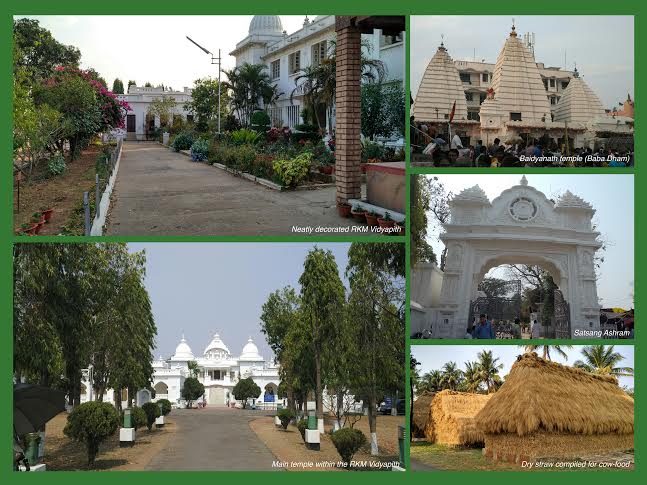 The next morning, we started our journey for the famous Baidyanath Temple or Baba Dham around 6am. The ashram organized a Maruti van for us with a local boy as a driver who knows the nooks and corners of the city. It was really a sight on entering the Baidyanath dham! Hundreds of pilgrims were seen offering their pujas. Pandas usually charge quite a hefty amount for offering pujas to different Gods. It is a temple complex consisting of the main temple of Baba Baidyanath and 21 other temples. Got to know the history behind the famous place from a panda, “According to Hindu beliefs, the demon king Ravana worshipped Shiva at the current site of the temple to get the boons that he later used to wreak havoc in the world. Ravana offered his ten heads one after another to Shiva as a sacrifice. Pleased with this, Shiva descended to cure Ravana who was injured. As he acted as a doctor, he is referred to as Vaidhya (“doctor”). From this aspect of Shiva, the temple derives its name.”

The next place on our list was the Satsang Ashram which is known to be the place of Sree Sree Thakur Anukulchandra, who roared out his utmost optimism against a backdrop of extreme violence and sadness devouring the world. It was really a place full of peace and dignity. We were really moved by the simplicity of the in-house sevaks.

Nandan Pahar and Entertainment Park, was next on the list. The place is quite high from the ground, so a little difficult for aged persons to climb up. Upon reaching, the fine landscape view of Deoghar city will definitely catch your eyes. It is one of the major entertainment parks in Deoghar, with paddle boating facilities. It is also famous for a big Nandi Temple. This place also supplies drinking water to a large section of the population. It also has a ghost house, a boot house, a mirror house and a restaurant for recreation purposes.

In between, we had our lunch at a nearby restaurant named Hotel Sukh Sagar where Butter Nan, Green Salad, Chicken Bharta and Lassi filled our hungry stomachs quite graciously. Without any delay, we started out for Trikut Pahar, one of the most exciting tourist destinations of Deoghar. You can enjoy the ropeway ride, wildlife adventures and a safe natural retreat. In the dense forest uphill are the famous Trikutachal Mahadeva Temple and the hermitage of Sage Dayananda. Trikut Hills contain three peaks and the highest peak is about 1,500 ft from the ground, making it an ideal location for trekking. The ropeway takes the tourists to the top of main peak. The charges are Rs 100 per person and it takes 15 minutes for a single rope-car to reach the cliff. An exciting 360 degree view of Deoghar is available from the top of Trikut Pahar. We called it a day after spending a lot of time here, as we had to return to the guest house and darkness was fast approaching. Next day our first visit was the Tapovan Hills which is famous for Tapo Nath Mahadev, the temple of Lord Shiva. It is named Tapovan because in ancient times it was a meditation spot (Tapobhumi) for the Nagas. There is a cracked rock at Tapovan. In the inner surface of the crack, one can see a portrait of Hanuman. This is an amazing feat as it is practically impossible to insert a paint brush in the crack and draw anything.

From there we moved to the ancient Basukinath temple which is the second most famous temple in and around Deoghar after Baidyanath temple. It is said that Basukinath temple is the court of Baba Bhole Nath. At Basukinath Dham, Shiv and Parvati temple are just in-front of each other. In the evening, when gates of both the temples are opened, the devotees are suggested to move away from in front of the gates as there is a belief that Lord Shiva and Mata Parvati meet each other at this time. There are many other small temples of different gods and goddesses also in the same compound.On return, we bumped into Naulakha Mandir which is one of the major attractions of Deoghar. The architecture of the temple resembles to that of Ramakrishna Math of Belur. The temple has beautiful idols of Radha and Krishna about 146 ft in height. The temple has an unusual history to tell. It was constructed by a donation of Rs 9 Lacs (hence the name of Naulakha) by Queen Charushila of Pathuria Ghat king’s family from Kolkata. It is said that the queen left her home, grieved by the untimely deaths of her husband Akshay Ghosh and son Jatindra Ghosh. At Tapovan she met holy Saint Balananda Brahmachari who advised her to construct this temple.

On the same way we found Sri Sri Balananda ashram where a great yogi and guru, Sri Sri Balananda Brahmachari Maharaj, used to stay and meditate. The beauty of the ashram lies in its trees and gardens and also in the temples of Tripura Sundari, Radha- Krishna, and Bhagbati Devi. One can also see a memorial that has been created at this place where the ashes of Sri Mohanananda Brahmachari were put to rest.

There were still some places (like Rikhia Yogashram, Baiju Temple, Mayurakshi River) to visit but due to time constraint, we had to return the next day. One last thing which I would like to mention is the Ramakrishna Mission Vidyapith ashram where we stayed, was not any less beautiful than rest of the city. It has a separate museum for the collectibles related to Sri Ramakrishna, Maa Sarada Devi and Swami Vivekananda. Neatly decorated interiors of the vast premises will soothe your mind and body to a great extent. You will really feel very close to the nature during the stay. Finally, the date of return arrived and we boarded the Jan Shatabdi Express from Jasidih station to Howrah. The short trip really made us quite refreshed and we decided to give another visit in coming days.

Mark my words; it doesn’t require much of a budget to have a three to four days trip out here (a maximum of Rs Three to Four thousand per head). Take some time out from your daily schedule and rejuvenate yourselves in the picturesque and holy town of Deoghar.

Tourist in your own city: Fun, food and travel in College Street on a rainy afternoon

The World On a Plate: MoneyFoodTravel’s culinary journey at…

Rooftop barbeque party: A do it yourself guide

Sherpafeet: How a techie turned entrepreneur is helping local guides…